PLDP and INEX Participate in the 38th ALDE Party Congress
by admin
in
Blog, News 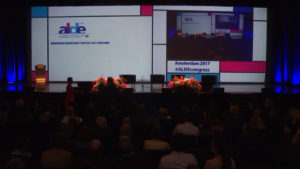 More than a thousand delegates from all over Europe are attending the ALDE party congress in Amsterdam. Among those delegates are many with top level political positions in Europe, including five liberal prime-ministers. Several European Commissioners, European Parliament members and national parliamentarians are also contributing to the three-day long Congress.

Yohan Byrde, the political leader of the third liberal party in the Netherlands is also attending. He is heading a delegation from the Progressive Liberal Democratic Party, which is preparing for the elections in 2019. The PLDP is eager and hopeful to join the ALDE family in Brussels.

From the start of the opening of the 38th ALDE Congress it is clear that the political group is feeling bold and that the recent electoral successes of many liberal parties across Europe have provided new political energy. In many European countries liberals play a key role. Whereas in the past, liberal parties were at times kingmakers, it is now often the rule that it is the liberals themselves who become the new kings, or from a more liberal perspective, prime-minsters.

If big is beautiful in politics, than by the scale of the dreams put forth by the speakers and the reactions from the audience, it is quite certain that the ALDE party is currently the most beautiful girl in town. 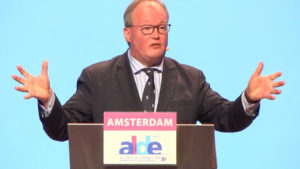 The ALDE President Hans van Baalen opened the Congress with a passion and drive from someone who knows he is on the best team, part of the fastest growing family and on the right side of history. The many electoral national successes over the past year should be a stepping stone for more. The ALDE president painted a grand picture of the near future where the liberals could become the biggest party at the European Parliament elections in 2019. A new wind is blowing through the institutions in Brussels and no longer is it the two old crocodiles, EPP and S&D, who have divided the shares for so long, that determine the outcome of the political discussion. Mr. Van Baalen called out to the audience to remind them that the liberal political successes in national elections should also be used to appoint liberals in the various European institutions which are now almost exclusively being held by conservatives and socialists. 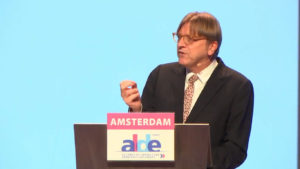 The ALDE president was followed by the ALDE party group leader Guy Verhofstadt who in his characteristic enthusiasm for an open and free society looked back as well as forward to the many political challenges. At the close of 2016 the prospects for the liberals looked dim with populism rising everywhere. Many thought that after Trump and Brexit there would be a domino effect. However, in 2017 politics took another turn. Populists didn’t win in The Netherlands, France or Germany. Instead, it was the liberals who gained momentum. There is now a liberal government in The Netherlands. In France, president Macron, who is in many respects a liberal, might join forces with ALDE after the 2019 EP elections. ALDE should take the initiative and become again the main driving force to remodel the European institutions in order to become more effective; European-wide electoral lists, democratic decision-making instead of unanimity and institutional reform. The biggest threat is not the rise of populism but the fear of change. We should believe in a better future and not be nostalgic about the past. After the defeat of nationalism, socialism and conservatism it is up to the values of liberalism to determine the future. From the reactions of the audience it appears that they are ready. 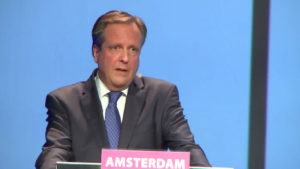 The following speakers were as upbeat about the opportunities for the liberal parties as the ALDE leaders. Alexander Pechtold, the political leader of the Dutch political party D66, shared his ambition to adapt the EU to the 21st century. He provided a list of concrete and specific actions that need to be taken to make the EU a world leader in the fight against climate change and to be the starkest defender of democracy. D66, meaning Democrats 1966, has been a defender of democracy for its 51 years’ history. It battles enemies from within, like Geert Wilders and his populist PVV, and from without. Always with the conviction that the liberal values provide the life essence for an open and free society. Among the specific actions that Mr. Pechtold mentioned is the idea to use the seats that will become vacant in 2019 due to the leave of the UK, for European-wide electoral lists. 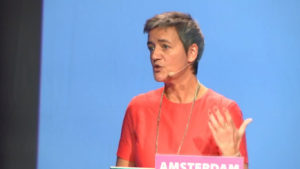 EC Commissioner Margrete Vestager asked the audience how to renew democracy. According to Ms. Vestager we need to renew the re-use of the institutions we already have in place. Europe is the best place to live in for minorities as well as for majorities. The foundations of the institutions that shape our society are sound and are even more important than the immediate views of the majority. People can be swept away by emotions and make the wrong decisions in the process. Our institutions are there to safeguard our future success from our inevitable, occasional and very human mistakes. As the Commissioner for Competition Ms. Vestager is dedicated to harnessing the forces of globalization so that they work for all and not just for the very few.

Prime-minister Xavier Bettel of Luxemburg had a personal message where he clearly showed what it means to be a European and to be part of a social and political project that has brought peace and prosperity to hundreds of millions of people. He himself has four grandparents from four different religions and nationalities. Even that generation considered itself in a fundamental way to be European. Prime-minister Bettel told the audience that in order to win the upcoming elections it will be important to have solidarity and unity between the parties. The liberals are the bloc against populism.

The question on how to renew democracy was the subject of the plenary debate that followed the key note speeches. This debate offered strongly felt views on the nature of liberalism and how modern democracy should be defended against anti-liberal views and standpoints. Several of the speakers also made their case to have liberalism and populism as opposing forces. Whether or not populism deserves to be on the same ideological level as liberalism with its long and successful history is however doubtful. The fact is nonetheless that in many of the recent elections the liberals were the strongest and most vocal opponents of the populists.

Bart Somers, the mayor of Mechelen and the president of the Committee of the Regions was clear about his political vision. The age-old frame of left versus right is not working anymore. The 21st century needs a new debate with new answers. These answers should come from the liberal values that lie at the core of the European project. Populism is the enemy of liberalism. The populists reject diversity and have as their purpose to destroy our freedom, values and the EU. In their fight against these values they use the narrative of the open society, but they mean exactly the opposite. It is reminiscent of George Orwells 1984, where the Ministry of Peace is only working on war. Mr. Somers made a clear point that the essence of liberalism is that it makes different identities possible. You can be Flemish, Belgian, European, liberal and father at the same time. Populists main goal however is to reduce everyone to one identity. You have no freedom without diversity and no diversity without freedom.

Albert Rivera, the political leader of the Spanish party Cs sees a great future for his liberal party. Although they currently have 13 percent of the electorate behind them, the polls are much more favorable. Furthermore, the party doesn’t just talk to its supporters. It talks to the majority. The Cs party is not business friendly but market friendly and is honest about the EU. The EU means better services for lower prices. It serves the ordinary people and provides them opportunities they wouldn’t have otherwise. It is Mr. Rivera’s vision that people are waiting for the truth and not the post-truth of the populists. They say the past is better than the future. Liberals say the opposite. We should think with our dreams and not with our fears. Populists say what language you need to speak and what flag to support. Liberals believe in free choices. In order to win the 2019 European elections the liberals should focus on values and not on left or right politics. We are also pro-EU and want the market to work for the citizens. 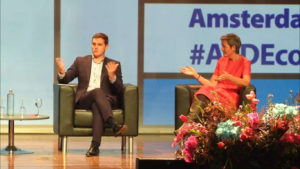 EC Commissioner Margrete Vestager was the third person on the panel and she also had many things to say about the workings of the EU and how to deal with the many political challenges. One main point that stood out was her position that liberals should not see the populists as enemies. Competitors maybe. We should meet them in an open space and convince the electorate that the solutions offered by the populists are not realistic. We must confront the populists and the general electorate with the confidence that our values are the basis of a fair and just society that brings peace and prosperity to all. No-one wants to be told what to do and we should not tell people that the EU is good for them. We need to show them. With 500 million citizens we can stand up to the big multinationals and have them play by our, democratic, rules. It is also good to make it clear to those who criticize the EU that it is more democratic than most national democracies and that it works in the best interests of the citizens of Europe.

The president of the Committee of the Regions, Mr. Bart Somers closed the panel debate with an example of his experience as the mayor of Mechelen. Groupthink is the most destructive force in politics. Left and right make caricatures of each other. They refuse to see the positive role models that would weaken their monolithic views of the situation. Liberals are more honest and rise above these caricatures. Liberals are not part of the left versus right debate. For them it is the question of an open versus a closed society that is driving the liberal political standpoints. We will win the elections in 2019. Liberalism is the project of the future.

For more information about the congress please visit the website of ALDE at www.aldeparty.eu. The homepage for the event can be accessed here: https://www.aldeparty.eu/events/alde-party-congress-amsterdam-2017