Towards a Fifth Freedom for the EU
by admin
in
Blog, News 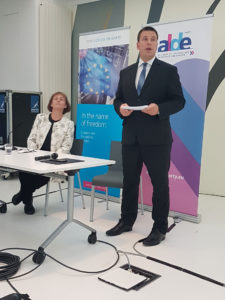 The event with Estonian Prime-Minister Jüri Ratas focused on the Estonian Presidency of the EU, which is currently half way. The Prime-Minister shared a positive and hopeful vision of the current and future state of the EU. It is the mission of Estonia to increase the diplomatic ties between the members of the Union and focus on the shared values that bring the European nations together. As a nation that lived under Soviet rule for decades, Estonia remains sensitive and open to the partner countries who are at the moment outside of the European Union. The Estonian border is that of NATO and the EU. The EU will not leave the Eastern Neighborhood partnership out in the cold. The prime-minister said that what we should do is to make the points that we want to reach more practical and realistic. Concrete steps are good. There is an Eastern Partnership Center in Estonia, where we work with local government and others. These are very concrete things. There will be an Eastern Neighborhood Partnership summit in Brussel in November where we hope to find new steps.

In response to a question on the violation of the rights of Chameria to their own identity, the prime-minister emphasized that he is a strong proponent of implementing the rights of nations and peoples to become fully European and enlarging the community, thereby strengthening Europe. We need to move forward and leave anti-liberal views behind.

An important part of the speech of the prime-minister focused on data, access to information and cybersecurity. Estonia is a leader in this field and actively works on creating a digital Europe. The future is digital. It is the coal and steel of this century. In this vision it is crucially important that the digital single market becomes a reality. A digital Europe should be based on a fifth freedom; that of the freedom of movement of data. Estonia is very much in favor of the EU strategy on cybersecurity and welcomes the act regulating the free movement of data.

The event was followed by a short reception where INEX president Yohan Byrde had the opportunity to discuss with the prime-minister in preparation for the upcoming meetings INEX has in Estonia in October.

For more information on the event please visit the websites of the organizers: